This February, Denise and Andrew were getting married and needed someone to cater the main meal at their wedding reception. After searching for a company that could provide an extensive menu for their wedding guests, they settled on the Hog Roast Ebbw Vale team as they could provide great traditional British food to lots of guests at a great price. The team could provide food for the reception, main meal and an evening buffet. 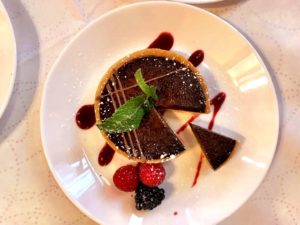 When the guests arrived at the wedding reception, the Hog Roast Ebbw Vale team had canapes ready to serve alongside champagne. The couple chose the miniature vegetarian quiches, wild mushroom bouchees, tiger prawns, smoked salmon on fresh brown bread and spicy Thai chicken kebabs as the canapes. For the main meal, the Hog Roast team’s waiters served salad nicoise, a classic French summer salad, as the starter. Following this, the couple chose spring lamb, seasoned with rosemary served with mint and a mustard and dill sauce, and whole roasted turkeys, served with fresh cranberries and sage and onion stuffing, as the main meats alongside the team’s classic vegetarian options. Salads and seasonal vegetables were served alongside jacket wedges and new potatoes in herb butter. Following the main meals, the Hog Roast Ebbw Vale team’s waiters served chocolate tortes, individually crafted with a light crunchy base, and sticky toffee pudding, with the chef’s classic toffee sauce, both of which were served with fresh cream. The team also served tea, coffee and mints to the table to finish off the fantastic reception.

That evening reception was centred around a hog roast buffet consisting of spit roasted pig with crispy crackling, homemade stuffing and traditional apple sauce. A Caesar salad, green leaf salad and Waldorf salad were also placed along the buffet table and had been prepared freshly on site. Alongside the selection of salad, jacket potatoes and roasted new potatoes in rosemary and garlic were served to the table. The wedding was beautiful and the couple were overjoyed by the success of the food from the Hog Roast Ebbw Vale team and were very grateful for their fantastic efforts throughout the day.