With just 4 weeks to go until the big day Hog Roast Connahs Quay are getting more and more calls about providing Christmas lunches or food at Christmas parties, so if you are hoping to book do so soon to avoid disappointment!

This week we were contacted by Andy who wanted to organise a Christmas party for him and his friends. Since leaving university and starting work he told us how they had all struggled to meet up and so wanted to do something special to get everyone together for Christmas. This was where Hog Roast Connahs Quay came in! Andy explained that whenever he and his university pals met up it was always over a good meal and so he believed Hog Roast Connahs Quay would be ideal to convince everyone to attend due to our fantastic range of slow roasted foods. 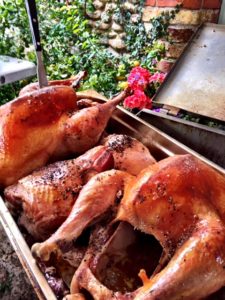 As this was to be a Christmas themed party of course Andy ordered slow roasted turkeys for the main event. The turkey, which we roast for several hours on site, was to be served with our chef’s secret family recipe cranberry sauce and lots of seasonal vegetables that we roast alongside the meat. As Andy really wanted to go all out as it had been a while since he had seen everyone, he also ordered a slow roasted side of lamb with rosemary and garlic potatoes that we always make sure are roasted to perfection and have just the right degree of fluffiness! We were also asked to provide a desert for Andy and his guests which was to be a Christmas pudding and a traditional chocolate gateau for good measure. Andy told us he would also be providing a cheese board, so his guests were sure to be spoilt for choice when the day came around!

With everything planned, we let Andy know he had nothing to worry about and to just get excited for the Hog Roast Connahs Quay feast we have planned!