Hog Roast Brockworth often caters events in and around Gloucestershire, as well as further afield, but recently we catered an event close to home, at Gloucester Business Park, which is located in Brockworth itself. Daisy from Universal Events asked us to cook our delicious pigs in buns for an event at Hayley Group Limited, which is an engineering inventory suppliers based in the UK and in the Czech Republic. The Gloucester Business Park branch of Hayley Group Limited would be where our team at Hog Roast Brockworth would cook a stunning centrepiece hog roast for several hours before serving around 100 guests.

We arrived early in the morning when it was still dark in order to set up the equipment and to start prepping the meat to be roasted. It takes a few hours to cook a hog to absolute perfection, and as we would be serving from late morning onwards, we got on with preparing it straight away. Once the meat is scored, covered in water and then smothered in salt, all we have to do is turn on the hog roast machine, set the temperature and let it do its magic. We keep an eye on it as it cooks, just in case, but otherwise our machine does all the hard work.

For this event, Daisy asked us to cook a hog to make the guests our supremely tasty pigs in buns (which you may know as hog roast rolls). We carve off the crackling, slice into the meat and fill floury bread rolls and wraps with bits of both, add sage and onion stuffing and 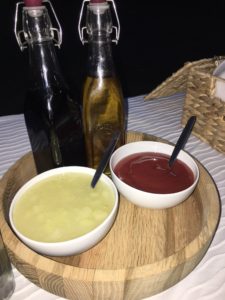 apple sauce (both of which are homemade by our Hog Roast Brockworth chefs) and voila – pigs in buns fit for a king. We always bring condiments, as often people say that a pig in a bun is not complete without a bit of sauce, and we ensure there’s plenty of serviettes, especially for a business event, as you won’t want ketchup or apple sauce spilled down your suit!

Between 11.30am and 2.30pm, we served lots of happy guests at Hayley Group Limited our truly scrumptious food and the smiles on their faces said it all.