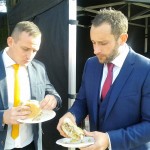 hog roast in Pembroke Dock using one of their wonderful free range, rare breed pigs. The evening was a charity event for one of their former members, a live band, DJ and a raffle all kept the 150 guests entertained, whilst the smell of the hog roast in Pembroke Dock from Spitting Pig’s gazebo kept everybody eager for the 8pm serve time! Spitting Pig Wales however had a challenge, as the Welsh Coastal weather lived up to its reputation, strong gusty winds buffeted the gazebo, rain was coming in almost horizontal but this didn’t stop cooking of the slow roast pig!!  A full 12 hours of cooking and the pig was ready, it was decided given the awful weather conditions to bring the hog roast machine in so the pig could be carved and served inside, allowing everyone to enjoy the soft floured rolls, that succulent & tender pulled pork, the homemade sage & onion stuffing and the golden crispy crackling, without them having to venture outside and brave the elements.
The evening was a huge success and several thousands of pounds were raised, Spitting Pig Wales quietly packed away and left the guests to party late into the evening.