Spitting Pig Wales team today travelled to the Community Hall in Myddfai, Llandovery to celebrate the marriage of Phil & Lauren. The couple were married in St Michael’s Church, Myddfai , just a stones throw from the community hall. Their wedding planner had done a fantastic job decorating the hall, a truly magical venue. Spitting Pig Wales had been asked to provide one of their own home produced rare breed pigs, from their farm in Ffos Yr Ewig, Llanfynydd. With the rolls being produced in the Llandeilo bakery this was a really ‘low food miles’ hog roast in Myddfai. The pig roast was fired up at 6am, giving it a good 12 hours of continuous cooking before the 8pm serve. The 90 guests formed an orderly 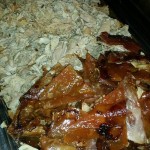 queue, taunted by the amazing aroma from the cooking pig. They were not disappointed, the crackling was crisp and golden, the pork soft & succulent. It didn’t take long to serve with several coming back for 2nd & 3rd’s. The party carried on long into the evening with the fabulous Oye Santana tribute band blasting out the tunes. All Spitting Pig Wales had to do was clear up and return to our beautiful farm, Ffos Yr Ewig, Llanfynydd.